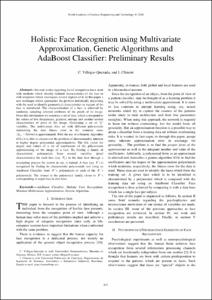 Except where otherwise noted, content on this work is licensed under a Creative Commons license : Attribution-NonCommercial-NoDerivs 3.0 Spain
Abstract
Several works regarding facial recognition have dealt with methods which identify isolated characteristics of the face or with templates which encompass several regions of it. In this paper a new technique which approaches the problem holistically dispensing with the need to identify geometrical characteristics or regions of the face is introduced. The characterization of a face is achieved by randomly sampling selected attributes of the pixels of its image. From this information we construct a set of data, which correspond to the values of low frequencies, gradient, entropy and another several characteristics of pixel of the image. Generating a set of “p” variables. The multivariate data set with different polynomials minimizing the data fitness error in the minimax sense (L∞ − Norm) is approximated. With the use of a Genetic Algorithm (GA) it is able to circumvent the problem of dimensionality inherent to higher degree polynomial approximations. The GA yields the degree and values of a set of coefficients of the polynomials approximating of the image of a face. By finding a family of characteristic polynomials from several variables (pixel characteristics) for each face (say Fi ) in the data base through a resampling process the system in use, is trained. A face (say F ) is recognized by finding its characteristic polynomials and using an AdaBoost Classifier from F’s polynomials to each of the Fi’s polynomials. The winner is the polynomial family closer to F’s corresponding to target face in data base.
CitationVillegas, C.; Climent, J. Holistic face recognition using multivariate approximation, genetic algorithms and AdaBoost classifier: preliminary results. A: World Congress on Science, Engineering and Technology. "World Congress on Science, Engineering and Technology, WCSET 2008". Venice: 2008, p. 802-806.
URIhttp://hdl.handle.net/2117/13013
ISBN2070-3740
Publisher versionhttp://www.waset.org/programs/Venice08.pdf
Collections
Share: