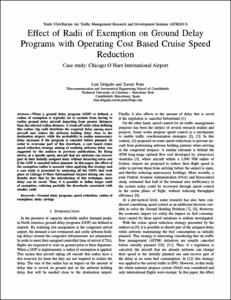 Document typeConference report
Rights accessOpen Access
Abstract
When a ground delay program (GDP) is defined, a radius of exemption is typically set to exclude from having to realize ground delay aircraft departing from greater distances than the selected radius distance. A trade-off exists when defining this radius: big radii distribute the required delay among more aircraft and reduce the airborne holding delay close to the destination airport, while the probability to realize unnecessary delay increases if the program is canceled before planned. In order to overcome part of this drawback, a cost based cruise speed reduction strategy aiming at realizing airborne delay was suggested by the authors in previous publications. By flying slower, at a specific speed, aircraft that are airborne can recover part of their initially assigned delay without incurring extra cost if the GDP is canceled before planned. In this paper, the effect of the exemption radius is assessed when applying this strategy and a case study is presented by analyzing all the GDPs that took place at Chicago O'Hare International Airport during one year. Results show that by the introduction of this technique, more delay can be saved. Thus, it is possible to define larger radii of exemption, reducing partially the drawbacks associated with smaller radii.
CitationDelgado, L.; Prats, X. Effect of radii of exemption on ground delay programs with operating cost based cruise speed reduction. A: USA/Europe Air Traffic Management Research and Development Seminars. "Proceedings of USA/Europe Air Traffic Management Research and Development Seminar". 2013.
URIhttp://hdl.handle.net/2117/130110
Collections
Share: