Resistive switching behavior seen from the energy point of view 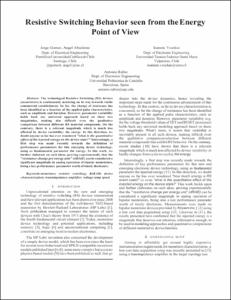 Document typeConference report
PublisherInstitute of Electrical and Electronics Engineers (IEEE)
Rights accessOpen Access
Abstract
The technology of Resistive Switching (RS) devices (memristors) is continuously maturing on its way towards viable commercial establishment. So far, the change of resistance has been identified as a function of the applied pulse characteristics, such as amplitude and duration. However, parameter variability holds back any universal approach based on these two magnitudes, making also difficult even the qualitative comparison between different RS material compounds. On the contrary, there is a relevant magnitude which is much less affected by device variability; the energy. In this direction, we doubt anyone so far has ever wondered 'what is the quantitative effect of the injected energy on the device state?' Interestingly, a first step was made recently towards the definition of performance parameters for this emerging device technology, using as fundamental parameter the energy. In this work, we further elaborate on such ideas, proving experimentally that the 'resistance change per energy unit' (dR/dE) can be considered a significant magnitude in analog operation of bipolar memristors, being a key performance parameter worth of timely disclosure.
CitationGómez, J. [et al.]. Resistive switching behavior seen from the energy point of view. A: International Symposium on On-Line Testing and Robust System Design. "2018 IEEE 24th International Symposium on On-Line Testing and Robust System Design (IOLTS 2018): 2-4 July 2018, Spain". Institute of Electrical and Electronics Engineers (IEEE), 2018, p. 147-150.
URIhttp://hdl.handle.net/2117/130084
DOI10.1109/IOLTS.2018.8474167
ISBN9781538659922
Publisher versionhttps://ieeexplore.ieee.org/document/8474167
Collections
Share: