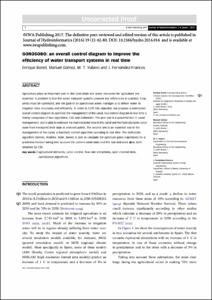 Fernández-Francos, Joaquín
Document typeArticle
Rights accessOpen Access
Abstract
One of the main problems in water management of irrigation systems is the control of the equitable distribution of water among different orifice offtakes. The difficulty of managing a canal is partly caused by the lack of knowledge of the canal state because the scheduled demand is often not fulfilled, since farmers extract more water than is scheduled and it is impossible for the watermaster to determine the canal state. However, an innovative developed algorithm called CSE is proposed in this paper. This algorithm is able to estimate the real extracted flow and the hydrodynamic canal state (that is, the water level and velocity along the irrigation canal). The algorithm solves an inverse problem implemented as a nonlinear optimization problem using the Levenberg–Marquardt method. The algorithm is tested, taking into account several numerical examples, and a practical implementation is made for a real case study in the PAC-UPC canal, a 220 m laboratory canal especially designed for research into irrigation canal control area and irrigation canal modelling. This useful algorithm evaluates the real extraction flow and the canal state and could be a useful tool for a feedback controller.
CitationBonet, E. [et al.]. CSE algorithm: ‘canal survey estimation’ to evaluate the flow rate extractions and hydraulic state in irrigation canals. "Journal of hydroinformatics", Gener 2017, vol. 19, núm. 1, p. 62-80.
URIhttp://hdl.handle.net/2117/130063
DOI10.2166/hydro.2016.014
ISSN1464-7141
Publisher versionhttps://iwaponline.com/jh/article/19/1/62/3524/CSE-algorithm-canal-survey-estimation-to-evaluate
Collections
Share: