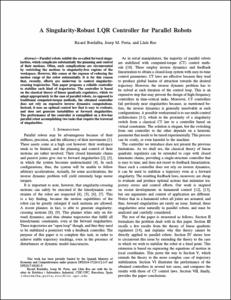 Except where otherwise noted, content on this work is licensed under a Creative Commons license : Attribution-NonCommercial-NoDerivs 3.0 Spain
Abstract
Parallel robots exhibit the so-called forward singularities, which complicate substantially the planning and control of their motions. Often, such complications are circumvented by restricting the motions to singularity-free regions of the workspace. However, this comes at the expense of reducing the motion range of the robot substantially. It is for this reason that, recently, efforts are underway to control singularity- crossing trajectories. This paper proposes a reliable controller to stabilize such kind of trajectories. The controller is based on the classical theory of linear quadratic regulators, which we adapt appropriately to the case of parallel robots. As opposed to traditional computed-torque methods, the obtained controller does not rely on expensive inverse dynamics computations. Instead, it uses an optimal control law that is easy to evaluate, and does not generate instabilities at forward singularities. The performance of the controller is exemplified on a five-bar parallel robot accomplishing two tasks that require the traversal of singularities.
Description
© 20xx IEEE. Personal use of this material is permitted. Permission from IEEE must be obtained for all other uses, in any current or future media, including reprinting/republishing this material for advertising or promotional purposes, creating new collective works, for resale or redistribution to servers or lists, or reuse of any copyrighted component of this work in other works
CitationBordalba, R.; Porta, J.; Ros, L. A singularity-robust LQR controller for parallel robots. A: IEEE/RSJ International Conference on Intelligent Robots and Systems. "2018 IEEE/RSJ International Conference on Intelligent Robots and Systems (IROS)". Institute of Electrical and Electronics Engineers (IEEE), 2018, p. 270-276.
URIhttp://hdl.handle.net/2117/130001
DOI10.1109/IROS.2018.8594084
Publisher versionhttps://ieeexplore.ieee.org/document/8594084
Collections
Share: