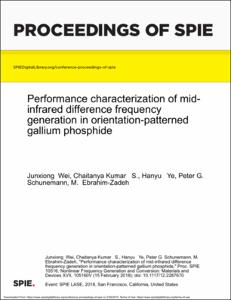 Orientation-patterned gallium phosphide (OP-GaP) is a recently developed nonlinear material with wide transparency across 0.8-12 μm and high nonlinearity (d14∼70 pm/V), which is a promising candidate material for mid-infrared generation. Here we report the full performance characterization of a tunable single-pass nanosecond difference frequency generation (DFG) source based on OP-GaP by mixing the output of a Q-switched Nd:YAG laser at 1.064 μm with the signal from a pulsed MgO:PPLN OPO pumped by the same laser. Using the longest OP-GaP crystal (40 mm) deployed to date, the DFG source provides up to ∼14 mW of average output power at 2719 nm at 80 kHz repetition rate, with >6 mW across 2492-2782 nm, in TEM00 spatial profile. By performing relevant measurements, detrimental issues such as residual absorption and thermal effects have been studied and confirmed. The temperature and spectral acceptance bandwidths for DFG in the 40-mm-log OP-GaP are measured to be 18 °C and 17 nm, respectively, at 1766 nm. The DFG beam exhibits passive power stability better than 1.7% rms over 1.4 hours at 2774 nm, compared to 1.6% and 0.1% rms for the signal and pump, respectively. The polarization dependence of the input beams on the DFG power has also been systematically investigated, for the first time to our knowledge. Further, we have measured the damage threshold of the OP-GaP crystal to be 0.8 J/cm2 at 1064 nm.
CitationWei, J. [et al.]. Performance characterization of midinfrared difference frequency generation in orientation-patterned gallium phosphide. A: Nonlinear Frequency Generation and Conversion: Materials and Devices XVII. "Proceedings of SPIE". San Francisco: SPIE, 2018, p. 1-8.
URIhttp://hdl.handle.net/2117/129907
DOI10.1117/12.2287670
Publisher versionhttps://www.spiedigitallibrary.org/conference-proceedings-of-spie/10516/105160V/Performance-characterization-of-mid-infrared-difference-frequency-generation-in-orientation/10.1117/12.2287670.short?SSO=1