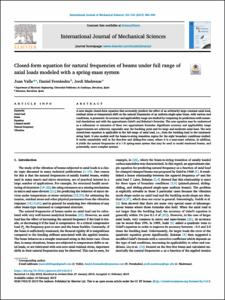 Except where otherwise noted, content on this work is licensed under a Creative Commons license : Attribution-NonCommercial-NoDerivs 3.0 Spain
ProjectMULTI-MEMS SINERGICOS Y EFICIENTES INTEGRADOS EN CMOS PARA LA INTERNET DE LAS COSAS (MINECO-TEC2015-67278-R)
Abstract
A new simple closed-form equation that accurately predicts the effect of an arbitrarily large constant axial load, residual stress or temperature shift on the natural frequencies of an uniform single-span beam, with various end conditions, is presented. Its accuracy and applicability range are studied by comparing its predictions with numerical simulations and with the approximate Galef’s and Bokaian’s formulas. The new equation may be understood as a refinement or extension of these two approximate formulas. Significant accuracy and applicability range improvements are achieved, especially near the buckling point and for large and moderate axial load. The new closed-form equation is applicable in the full range of axial load, i.e., from the buckling load to the tensioned-string limit. It also models well the beam-to-string transition region for the eight boundary conditions studied. It works remarkably well in the free-free and sliding-free cases, where it is a near-exact solution. In addition, it yields the natural frequencies of a 1-D spring-mass system that may be used to model tensioned beams, and potentially, more complex systems.
CitationValle, J.J.; Fernandez, D.; Madrenas, J. Closed-form equation for natural frequencies of beams under full range of axial loads modeled with a spring-mass system. "International journal of mechanical sciences", 1 Abril 2019, vol. 153-154, núm. April, p. 380-390.
URIhttp://hdl.handle.net/2117/129893
DOI10.1016/j.ijmecsci.2019.02.014
ISSN0020-7403
Publisher versionhttps://www.sciencedirect.com/science/article/pii/S0020740318322896
Collections
Share: