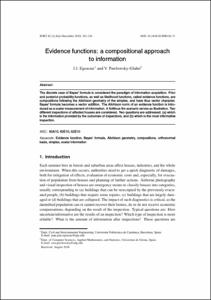 The discrete case of Bayes’ formula is considered the paradigm of information acquisition. Prior and posterior probability functions, as well as likelihood functions, called evidence functions, are compositions following the Aitchison geometry of the simplex, and have thus vector character. Bayes’ formula becomes a vector addition. The Aitchison norm of an evidence function is introduced as a scalar measurement of information. A fictitious fire scenario serves as illustration. Two different inspections of affected houses are considered. Two questions are addressed: (a) which is the information provided by the outcomes of inspections, and (b) which is the most informative inspection.
CitationEgozcue, J. J.; Pawlowsky, V. Evidence functions: a compositional approach to information. "SORT: statistics and operations research transactions", 1 Juliol 2018, vol. 42, núm. 2, p. 101-124.
URIhttp://hdl.handle.net/2117/129877
DOI10.2436/20.8080.02.71
ISSN1696-2281
Publisher versionhttps://www.idescat.cat/sort/sort422/42.2.1.egozcue-pawlowsky.pdf