A new method for ionospheric tomography and its assessment by ionosonde electron density, GPS TEC, and single-frequency PPP 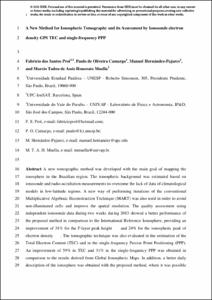 Honorato Muella, Marcio Tadeu de Assis
Document typeArticle
PublisherInstitute of Electrical and Electronics Engineers (IEEE)
Rights accessOpen Access
Abstract
A new tomographic method was developed with the main goal of mapping the ionosphere in the region of Brazil. The ionospheric background was estimated based on ionosonde and radio-occultation measurements to overcome the lack of data provided by climatological models in low-latitude regions. A new method of performing iterations of the conventional multiplicative algebraic reconstruction technique (MART) was also used in order to avoid nonilluminated cells and improve the spatial resolution. The quality assessment using independent ionosonde data during two weeks in 2013 showed a better performance of the proposed method in comparison to the international reference ionosphere, providing improvements of 31% for the F-layer peak height hm and 24% for the ionospheric peak of electron density Nm. The tomographic technique was also evaluated in the estimation of the total electron content (TEC) and in the single-frequency precise point positioning (PPP). Improvements of 59% in TEC and 31% in the single-frequency PPP were obtained in comparison to the results derived from global ionospheric maps. In addition, a better daily description of the ionosphere was obtained using the proposed method, where it was possible to detect the peak height increasing associated with the prereversal enhancement of the vertical plasma drift that occurs near sunset hours. The results reveal that the modified form of the MART tomographic technique can be considered a useful tool for technical and scientific communities involved in space weather, spatial geodesy, and telecommunications.
Description
© 2019 IEEE. Personal use of this material is permitted. Permission from IEEE must be obtained for all other uses, in any current or future media, including reprinting/republishing this material for advertising or promotional purposes,creating new collective works, for resale or redistribution to servers or lists, or reuse of any copyrighted component of this work in other works.
CitationProl, F. [et al.]. A new method for ionospheric tomography and its assessment by ionosonde electron density, GPS TEC, and single-frequency PPP. "IEEE transactions on geoscience and remote sensing", May 2019, vol. 57, núm. 5, p. 2571-2582.
URIhttp://hdl.handle.net/2117/129857
DOI10.1109/TGRS.2018.2874974
ISSN0196-2892
Publisher versionhttps://ieeexplore.ieee.org/document/8519773
Collections
Share: