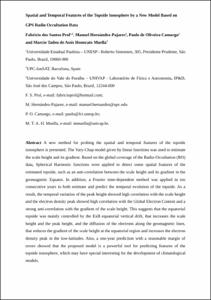 A new method for probing the spatial and temporal features of the topside ionosphere is presented. The Vary-Chap model given by linear functions was used to discover and report features of the topside scale height and its gradient. Based on the global coverage of the radio occultation data, spherical harmonic functions were applied to detect some spatial features of the estimated topside. In addition, a Fourier time-dependent method was applied in 10 consecutive years to both estimate and predict the temporal evolution of the topside. As a result, the temporal variation of the peak height showed high correlation with the scale height. And on the other hand, the electron density peak showed a strong anticorrelation with the gradient of the scale height. This suggests that the equatorial topside was mainly controlled by the E × B equatorial vertical drift, which increases the scale height in the equatorial region, and the diffusion of the electrons along the geomagnetic field lines, which reduces the gradient of the scale height. Also, a 1 year prediction with a reasonable accuracy showed that the proposed model can be considered a practical and useful tool for predicting features of the topside ionosphere, which may have special interest for the development of climatological models.
CitationProl, F. [et al.]. Spatial and temporal features of the topside ionospheric electron density by a new model based on GPS radio occultation data. "Journal of geophysical research: space physics", Març 2018, vol. 123, núm. 3, p. 2104-2115.
URIhttp://hdl.handle.net/2117/129806
DOI10.1002/2017JA024936
ISSN2169-9380
Publisher versionhttp://onlinelibrary.wiley.com/wol1/doi/10.1002/2017JA024936/full