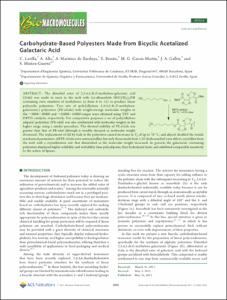 The dimethyl ester of 2,3:4,5-di-O-methylene-galactaric acid (Galx) was made to react in the melt with 1,n-alkanediols HO(CH2)nOH containing even numbers of methylenes (n from 6 to 12) to produce linear polycyclic polyesters. Two sets of poly(alkylene 2,3:4,5-di-O-methylenegalactarate) polyesters (PE-nGalx) with weight-average molecular weights in the ∼5000 - 10000 and ∼35000 - 45000 ranges were obtained using TBT and DBTO catalysts, respectively. For comparative purposes a set of poly(alkylene adipate) polyesters (PE-nAd) was also synthesized with molecular weights in the higher range using a similar procedure. The thermal stability of PE-nGalx was greater than that of PE-nAd although it notably decayed as molecular weight decreased. The replacement of Ad by Galx in the polyesters caused increases in Tg of up to 70ºC, and almost doubled the tensile mechanical parameters. All PE-nGalx were semicrystalline but only those made from 1,12-dodecanediol were able to crystallize from the melt with a crystallization rate that diminished as the molecular weight increased. In general, the galactarate containing polyesters displayed higher solubility and wettability than polyadipates, they hydrolyzed faster and exhibited comparable sensitivity to the action of lipases.
CitationLavilla, C. [et al.]. Carbohydrate-based polyesters made from bicyclic acetalized galactaric acid. "Biomacromolecules", 11 Juliol 2011, vol. 12, núm. 7, p. 2642-2652.
URIhttp://hdl.handle.net/2117/12959
DOI10.1021/bm200445w
ISSN1525-7797
Publisher versionhttp://pubs.acs.org/toc/bomaf6/12/7