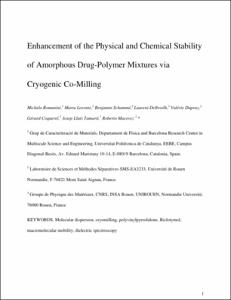 Except where otherwise noted, content on this work is licensed under a Creative Commons license : Attribution-NonCommercial-NoDerivs 3.0 Spain
Abstract
Amorphous dispersions of the Biclotymol antiseptic are obtained in polyvinylpyrrolidone (PVP), for different drug loadings, by comilling at temperatures below the glass transition of both components. Characterization of the dispersions by scanning differential calorimetry and temperature-dependent broadband dielectric spectroscopy shows them to be homogeneous amorphous molecular mixtures. A single glass transition with pronounced enthalpy recovery peak is observed, indicative of the formation of a homogeneous glass state characterized by substantial aging. The polymer has a considerable antiplasticizing effect on the drug, increasing its glass transition temperature (Tg) to well above room temperature. The Tg of the mixture increases linearly with the macromolecular mass fraction. Three (macro)molecular relaxations are identified in the isothermal dielectric spectra of the mixtures. The slowest process corresponds to the cooperative (a relaxation) dynamics of the polymer chains and drug molecules simultaneously, and its relaxation time becomes longer the higher the polymer content. The fastest one is an intramolecular relaxation mode of Biclotymol and is virtually unaffected by the presence of the polymer. Finally, the intermediate relaxation, which is also observed in pure PVP, is assigned to the motion of the polymer side groups. Its activation barrier increases with increasing drug content, indicative of a direct interaction of the drug with the pyrrolidone moieties, likely via hydrogen bonding to the carbonyl oxygen. Contrary to pure PVP, the mixtures are not hygroscopic. Mechanical amorphization by cryomilling thus yields glassy molecular mixtures at arbitrary drug concentration, with enhanced physical stability against crystallization and enhanced chemical stability against hydrolysis reactions.
CitationRomanini, M. [et al.]. Enhancement of the physical and chemical stability of amorphous drug-polymer mixtures via cryogenic comilling. "Macromolecules", 27 Novembre 2018, vol. 51, núm. 22, p. 9382-9392.
URIhttp://hdl.handle.net/2117/129503
DOI10.1021/acs.macromol.8b01271
ISSN0024-9297
Publisher versionhttps://pubs.acs.org/doi/10.1021/acs.macromol.8b01271
Collections
Share: