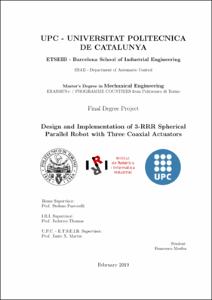 This work, entitled “Design and Implementation of 3-RRR Spherical Parallel Robot with Three Coaxial Actuators” has had the scope to analytically study the kinematics (both inverse and forward one) of a coaxial conﬁguration of a spherical manipulator. The complete 3D design of the robot has been realised, building it thanks to a 3D printing process called FDM Technology (fused deposition modelling). Moreover, it has been modelled a Feed-Forward Position Control in order to move the three electrical motors, in Matlab environment. As for the state of the art, this thesis has distanced itself from the literature before [5, 4, 6, 3], not using a Denavith-Hartenberg’s approach or a loop equation process, in order to describe the kinematics, but investigating on new method, that could be more eﬃcient in a computational terms, and exploiting its peculiar characteristics and functioning. For these reasons, it has been chosen a geometric method [20] to realise the analytical model of the manipulator. This approach has involved only constant and variable distances, relative to a set of fundamental points, after deﬁning the parameters of the robot’s architecture. In the end, these choices, mentioned before, lead to obtain, as a results, a clear simulation of the robot, in order to better manage it and to focus on the core of both the kinematics and implementations, instead of the traditional process to obtain them, already investigated in literature
SubjectsRobots--Control systems, Robots -- Sistemes de control
URIhttp://hdl.handle.net/2117/129388