From a feeder port to a hub port: the evolution pathways, dynamics and perspectives of Ningbo-Zhoushan port (China) 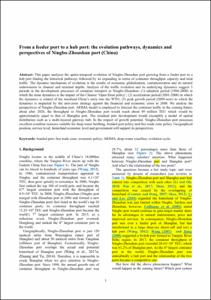 Zheng, Pengjun
Document typeArticle
Rights accessOpen Access
Abstract
This paper analyses the spatio-temporal evolution of Ningbo-Zhoushan port growing from a feeder port to a hub port finding the historical pathways followed by its expanding in terms of container throughput capacity and total traffic. The dynamic mechanism of evolution is the results of economic globalization, containerization and its natural endowments in channel and terminal depths. Analysis of the traffic evolution and its underlying dynamics suggest 3 periods in the development processes of container transport in Ningbo-Zhoushan: (1) adoption period (1986–2000) in which the main dynamics is the impact of the Chinese ‘Open Door policy’; (2) acceleration period (2001–2008) in which the dynamics is related of the mainland China's entry into the World Trade Organization; (3) peak growth period (2009-now) in which the dynamics is impacted by the anti-crisis strategy against the financial and economic crisis in 2008. We analyse the perspectives of Ningbo-Zhoushan port. ARIMA model is employed to forecast the container traffic in the coming future; about after 2026, the throughput in Ningbo-Zhoushan port would reach about 49 million TEU which would be approximately equal to that of Shanghai port. The resultant port development would exemplify a model of spatial distribution such as a multi-layered gateway hub. In the respect of growth potential, Ningbo-Zhoushan port possesses excellent coastline resource suitable for deep-water berthing, bonded port policy and free trade zone policy. Geographical position, service level, hinterland economic level and government will support its perspectives.
CitationFeng, H.; Grifoll, M.; Zheng, P. From a feeder port to a hub port: the evolution pathways, dynamics and perspectives of Ningbo-Zhoushan port (China). "Transport policy", Abril 2019, vol. 76, p. 21-35.
URIhttp://hdl.handle.net/2117/129378
DOI10.1016/j.tranpol.2019.01.013
ISSN0967-070X
Publisher versionhttps://www.sciencedirect.com/science/article/pii/S0967070X1830622X
Collections
Share: