The land–sea coastal border: a quantitative definition by considering the wind and wave conditions in a wave-dominated, micro-tidal environment 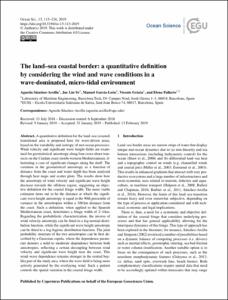 Document typeArticle
Rights accessOpen Access
European Commission's projectCEASELESS - Copernicus Evolution and Aplications with Sentinel Enhancements and Land Effluents for Shores and Seas (EC-H2020-730030)
Abstract
A quantitative definition for the land–sea (coastal) transitional area is proposed here for wave-driven areas, based on the variability and isotropy of met-ocean processes. Wind velocity and significant wave height fields are examined for geostatistical anisotropy along four cross-shore transects on the Catalan coast (north-western Mediterranean), illustrating a case of significant changes along the shelf. The variation in the geostatistical anisotropy as a function of distance from the coast and water depth has been analysed through heat maps and scatter plots. The results show how the anisotropy of wind velocity and significant wave height decrease towards the offshore region, suggesting an objective definition for the coastal fringe width. The more viable estimator turns out to be the distance at which the significant wave height anisotropy is equal to the 90th percentile of variance in the anisotropies within a 100 km distance from the coast. Such a definition, when applied to the Spanish Mediterranean coast, determines a fringe width of 2–4 km. Regarding the probabilistic characterization, the inverse of wind velocity anisotropy can be fitted to a log-normal distribution function, while the significant wave height anisotropy can be fitted to a log-logistic distribution function. The joint probability structure of the two anisotropies can be best described by a Gaussian copula, where the dependence parameter denotes a mild to moderate dependence between both anisotropies, reflecting a certain decoupling between wind velocity and significant wave height near the coast. This wind–wave dependence remains stronger in the central baylike part of the study area, where the wave field is being more actively generated by the overlaying wind. Such a pattern controls the spatial variation in the coastal fringe width.
CitationSanchez-arcilla, A. [et al.]. The land–sea coastal border: a quantitative definition by considering the wind and wave conditions in a wave-dominated, micro-tidal environment. "Ocean science", Gener 2019, vol. 15, núm. 1, p. 113-126.
URIhttp://hdl.handle.net/2117/129369
DOI10.5194/os-15-113-2019
ISSN1812-0784
Publisher versionhttps://www.ocean-sci.net/15/113/2019/
Collections
Share: