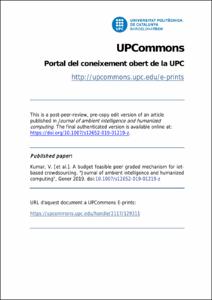 Sharma, Aniruddh
Document typeArticle
PublisherSpringer
Rights accessOpen Access
Abstract
We develop and extend a line of recent works on the design of mechanisms for heterogeneous tasks assignment problem in ’crowdsourcing’. The budgeted market we consider consists of multiple task requesters and multiple IoT devices as task executers. In this, each task requester is endowed with a single distinct task along with the publicly known budget. Also, each IoT device has valuations as the cost for executing the tasks and quality, which are private. Given such scenario, the objective is to select a subset of IoT devices for each task, such that the total payment made is within the allotted quota of the budget while attaining a threshold quality. For the purpose of determining the unknown quality of the IoT devices we have utilized the concept of peer grading. In this paper, we have carefully crafted a truthful budget feasible mechanism for the problem under investigation that also allows us to have the true information about the quality of the IoT devices. Further, we have extended the set-up considering the case where the tasks are divisible in nature and the IoT devices are working collaboratively, instead of, a single entity for executing each task. We have designed the budget feasible mechanisms for the extended versions. The simulations are performed in order to measure the efficacy of our proposed mechanism
CitationKumar, V. [et al.]. A budget feasible peer graded mechanism for iot-based crowdsourcing. "Journal of ambient intelligence and humanized computing", Abril 2020. vol. 11, num. 4, p. 1531–1551
URIhttp://hdl.handle.net/2117/129311
DOI10.1007/s12652-019-01219-z
ISSN1868-5137
Publisher versionhttps://link.springer.com/article/10.1007%2Fs12652-019-01219-z
Collections
Share: