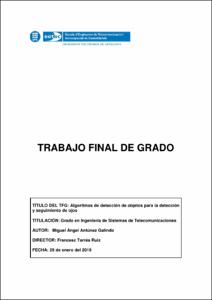 The Directorate General of Traffic has determined that sleepiness is a factor involved, directly or indirectly, in between 15 and 30% of traffic accidents in Spain [1]. According to the study presented by the European Commission of the Automobile (CEA Foundation). "Sleep and fatigue, what are the habits of Spanish drivers?" [2]. A 59.22% of drivers say they have suffered micro dreams and 71.65% of respondents have felt symptoms of drowsiness behind the wheel. With the data provided by the general direction of traffic, it is demonstrated the need to provide a system to detect symptoms of sleepiness in car drivers. The project consists in designing a software solution capable of identifying by means of the analysis of images symptoms of fatigue in the driver, for this purpose the algorithms of Viola-Jones and Hough transform will be implemented for the detection and tracking of eyes. The system should evaluate the reliability of the two algorithms selected and that can later be implemented in processors in real time and used in driving safety applications. The objectives are to establish the computational cost and determine the reliability of the algorithms and in future studies to be able to implement the algorithm in a mobile device. To carry out the analysis and implementation of the algorithms, the Matlab mathematical tool will be used, once the implementation is developed, the reliability of the system can be tested with a public dataset of different images of people to assess different scenarios outside the environment of tests.
SubjectsImage processing, Imatges -- Processament
URIhttp://hdl.handle.net/2117/129222