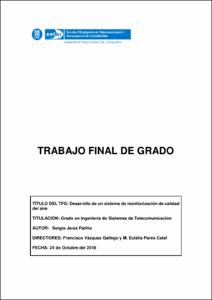 ; Vázquez Gallego, Francisco; Parés Calaf, M. Eulàlia
Document typeBachelor thesis
Rights accessOpen Access
Abstract
Currently, air pollution is an obvious reality in the world that poses a risk to public health. Efforts are being made to reduce emissions of polluting gases into the atmosphere and to expand warning services to protect the population from episodes of high pollution. One of the tools used to monitor the problem are the air pollution maps. In Catalonia, these maps are made by interposing the measurements of the permanent stations of the Generalitat distributed throughout the entire territory. The distribution of these stations is not homogeneous and, therefore, the resolution / quality of the map depends very much on the proximity or not to one of these stations. In the near future, these maps also take into account the data provided by Copernicus' European satellite system, which offers a resolution of 7x7 km. If we had more gas measuring equipment, installed in buildings or vehicles with polluting emissions, such as bicycle models, they could be densified at a low cost and deploy a network of sensors that could affect the resolution and reliability of the pollution maps in the most populated areas. In this project we have developed a prototype device for the measurement of air pollutants. The measurement device is lightweight, low cost, with a very low power consumption, includes a microcontroller, different sensors, a positioning system and radio communications. The obtained measurements are sent to a server that are stored in a database allowing to see and analyze the data in graphs and maps of air quality.
SubjectsDetectors
URIhttp://hdl.handle.net/2117/129217
Collections
Share: