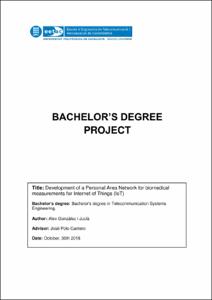 Except where otherwise noted, content on this work is licensed under a Creative Commons license : Attribution-NonCommercial-ShareAlike 3.0 Spain
Abstract
Internet of Things is a set of ever growing technologies and specialized devices that are increasingly influential in our everyday lives. IoT is all about connecting the physical and the digital worlds in one enabling the collection of real world data and the automation of processes. IoT turns your typical device into an smart, programmable one, more capable of interacting with humans and thus enabling users to better understand their surroundings through the data collected. This data collected by the IoT devices can then be used on all kinds of contemporary services and applications. This project aims to implement an IoT application for biomedical measurements, consisting of a WSN(Wireless Sensor Network), where three sensor nodes will collect physical world measurements. This collected information will be transmitted to a routing device, that further send the information to the internet, where the user will be able to access the data in real time through a web browser and schedule some events. In order to carry out the described scenario, a Raspberry Pi and four Zolertia Z1, three working as sensor nodes and one working as a routing node were used. The Z1 mote is powered by a low power MSP430 class microcontroller. Contiki was the operating system chosen to run the sensor nodes. In this scenario, Raspberry Pi plays the role of a router, enabling the connection of the WSN network and the internet. To send the information from the nodes, a high-speed program was developed, aiming to beat the default restrictions that Contiki OS imposes on high-speed networks. The transport protocol chosen is UDP. On the receiving end, an UDP server and a python script were developed with the intent to send the collected data to our ASP.NET web server and mySQL database. Finally connectivity tests and network speed tests of the deployed system are presented.
SubjectsInternet of things, Internet de les coses
DegreeGRAU EN ENGINYERIA DE SISTEMES DE TELECOMUNICACIÓ (Pla 2009)
URIhttp://hdl.handle.net/2117/129212
Collections
Share: