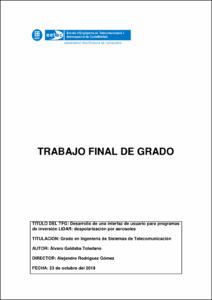 Document typeBachelor thesis
Rights accessOpen Access
Abstract
The project that has been developed for this work at the end of degree aims to integrate a series of routines in MATLAB, which allow us to obtain information about the depolarization that atmospheric aerosols produce on the laser signal produced by a multi-wavelength LIDAR. In order to carry out the work, information has been looked for information on how a graphic interface can be created using MATLAB, its internal working and properties, in addition to all the related to exchange data between functions and their representation. The original programs have been adapted to be able to work correctly with the user interfaces. Each operation carried out by means of commands has been programmed so that it can be used in a more friendly and intuitive way, using graphic elements such as buttons, text boxes and graphics for data representation. Each program loads a series of files that contain the data that is used internally to obtain and represent results. Depending of the type of file loaded the application processes the data in one way or another, this is why a small explanation has been made of the content that each type of file has and whether they are raw or processed files. The final result consists of a main menu called Depol Menu, which contains the Calibration and Analysis GUI where the routines used by the original programs are adapted. The present work, apart from the development of the application and the verification of the correct working of it, also has documented a brief introduction of how a LIDAR system works, as well as the system that the Universitat Politecnica de Catalunya (Campus Nord) has mounted for obtain the measurements that are used by the user interface developed.
SubjectsAerosols, MATLAB
URIhttp://hdl.handle.net/2117/129210
Collections
Share: