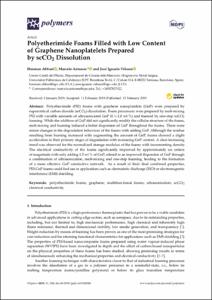 Document typeArticle
PublisherMultidisciplinary Digital Publishing Institute (MDPI)
Rights accessOpen Access
Abstract
Polyetherimide (PEI) foams with graphene nanoplatelets (GnP) were prepared by supercritical carbon dioxide (scCO2) dissolution. Foam precursors were prepared by melt-mixing PEI with variable amounts of ultrasonicated GnP (0.1–2.0 wt %) and foamed by one-step scCO2 foaming. While the addition of GnP did not significantly modify the cellular structure of the foams, melt-mixing and foaming induced a better dispersion of GnP throughout the foams. There were minor changes in the degradation behaviour of the foams with adding GnP. Although the residue resulting from burning increased with augmenting the amount of GnP, foams showed a slight acceleration in their primary stages of degradation with increasing GnP content. A clear increasing trend was observed for the normalized storage modulus of the foams with incrementing density. The electrical conductivity of the foams significantly improved by approximately six orders of magnitude with only adding 1.5 wt % of GnP, related to an improved dispersion of GnP through a combination of ultrasonication, melt-mixing and one-step foaming, leading to the formation of a more effective GnP conductive network. As a result of their final combined properties, PEI-GnP foams could find use in applications such as electrostatic discharge (ESD) or electromagnetic interference (EMI) shielding
CitationAbbasi, H.; De Sousa Pais, M.; Velasco J.I. Polyetherimide foams filled with low content of graphene nanoplatelets prepared by scCO2 dissolution. "Polymers", 13 Febrer 2019, vol. 11, núm. 2, p. 328-1-328-18.
URIhttp://hdl.handle.net/2117/129142
DOI10.3390/polym11020328
ISSN2073-4360
Publisher versionhttps://www.mdpi.com/2073-4360/11/2/328
Collections
Share: