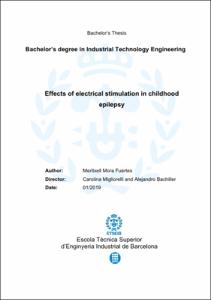 Document typeBachelor thesis
Rights accessOpen Access
Abstract
Epilepsy affects around 0.5% of children worldwide. At least a third of them are resistant to antiepileptic drugs and may have to undergo surgery. This condition is called refractory epilepsy. Beforehand, many tests have to be carried out to localise where the seizures are originated and whether surgery would damage functional areas. The amount of area that have to be resected by clinicians is called the epileptogenic zone (EZ). Nowadays, invasive and non-invasive tests are used to identify the EZ. In some cases, non-invasive evaluation suggests an uncertainty about where the seizures origin is. For this cases, invasive methods need to be carried out to complete the diagnose. Among the different invasive methods, stereoelectroencephalography (SEEG) has been used. Electrical stimulation using SEEG can aid clinicians in the determination of the EZ. In this study, the SEEG signals during electrical stimulation will be used to elaborate the threedimensional activation maps from a 19-year-old patient suffering from refractory epilepsy. The study will be held out with Matlab and Brainstorm. Firstly, we will segment the signals and we will remove the noise by filtering it. Secondly, we will conduct a time-frequency analysis where the activations at different frequency bands (low and high frequencies) will be taken into account to map the brain activity in the brain cortex. The observations from the conducted work allow narrowing down the epileptogenic zone that was firstly observed with non-invasive tests. The observations at high frequencies provide a more focalized pathological region, suggesting that clinicians should use these frequency bands in order to delimit the EZ.
SubjectsEpilepsy--Treatment, Bioengineering, Medical electronics, Epilèpsia -- Tractament, Bioenginyeria, Electrònica mèdica
DegreeGRAU EN ENGINYERIA EN TECNOLOGIES INDUSTRIALS (Pla 2010)
URIhttp://hdl.handle.net/2117/129093
Collections
Share: