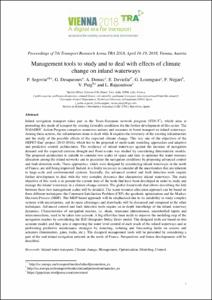 Except where otherwise noted, content on this work is licensed under a Creative Commons license : Attribution-NonCommercial-NoDerivs 3.0 Spain
Abstract
Inland navigation transport takes part in the Trans-European network program (TEN-T ), which aims at promoting this mode of transport by creating favorable conditions for the further development of this sector. The NAIADES Action Program comprises numerous actions and measures to boost transport on inland waterways. Among these actions, the infrastructure issue is dealt with. It requires the inventory of the existing infrastructure and the study of the possible effects of the expected climate change. This was one of the objectives of the GEPET-Eau project (2013-2016), which led to the proposal of multi-scale modeling approaches and adaptive and predictive control architectures. The resilience of inland waterways against the increase of navigation demand and the expected extreme drought and flood events was studied by considering deterministic models. The proposed architecture is suitable to consider two scales of space and time to optimize the water resource allocation among the inland networks and to guarantee the navigation conditions by proposing advanced control and fault detection tools. These approaches, which were designed by considering inland waterways in the north of France, are still being improved. Indeed, it is firstly necessary to consider all the uncertainties that are inherent to large-scale and environmental systems. Secondly, the advanced control and fault detection tools require further development to deal with the very complex dynamics that characterize inland waterways. The main objective of this work is to present the current state of the tools that have been developed in order to study and manage the inland waterways in a climate change context. The global framework that allows describing the link between these two management scales will be detailed. The water resource allocation approach can be based on three different techniques: the Constraint Satisfaction Problem (CSP), the quadratic optimization and the Markov Decision Process (MDP). The MDP-based approach will be emphasized due to its suitability to study complex systems with uncertainties, and its main advantages and drawbacks will be discussed and compared to the other techniques. Advanced control and fault detection tools require an in-depth knowledge of the inland waterway dynamics. Characteristics of navigation reaches, i.e. slope, resonance phenomenon, uncontrolled inputs and interconnections, need to be taken into account. A big effort has been made to improve the modeling step of the navigation reaches by considering the IDZ (Integrator Delay Zero) model. The designed tools are based on this accurate model, and they aim at improving the water level control of each reach of the inland waterways and at performing predictive maintenance strategies by detecting, isolating and forecasting faults on sensors and actuators (limnimeters, gates, locks, etc.). The designed management tools will be presented by considering a part of the real inland navigation network in the north of France. Perspectives and future developments will be described.
CitationSegovia, P. [et al.]. Management tools to study and to deal with effects of climate change on inland waterways. A: Transport Research Arena. "Proceedings of 7th Transport Research Arena TRA 2018". 2018, p. 1-10.
URIhttp://hdl.handle.net/2117/129066
DOI10.5281/zenodo.1491484
Publisher versionhttps://zenodo.org/record/1491484#.XGQbvjNKjIU
Collections
Share: