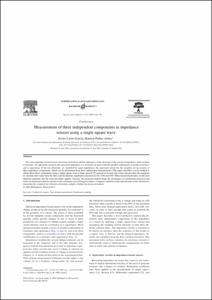 Document typeArticle
PublisherElsevier
Rights accessOpen Access
Abstract
Two-wire impedance-based sensors involving electrolytes add the impedance of the electrodes to the electrical impedance of the medium to measure. An equivalent circuit for the measured impedance is a resistance in series with the parallel combination of another resistance and a capacitance. If the two electrodes are modelled by equal impedances, the equivalent circuit for the complete set up consists of three impedance components, which can be determined from three independent measurements. This paper describes a novel method to obtain those three components using a single square wave voltage (period 2T) instead of several sine waves and provides the equations to calculate their value from the three current intensity amplitudes measured at T/8, 3T/8 and 5T/8. Other measurement times would need different equations, but the same procedure applies. Anyway, the proposed method keeps the advantages of synchronous detection and relies on analytical solutions instead of the customary curve fitting procedures. Computer simulation and experimental results obtained by measuring the conductivity of known electrolyte samples validate the proposed method
CitationLario García, J.; Pallás Areny, R. Measurement of three independent components in impedance sensors using a single square wave. Sensors and Actuators A: Physical, 2006, Vol. 110, No. 1-3, 164-170
URIhttp://hdl.handle.net/2117/1290
ISSN0924-4247
Collections
Share: