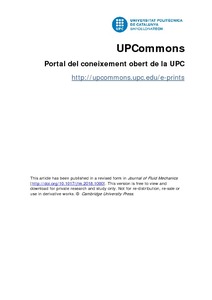 Document typeArticle
Rights accessOpen Access
Abstract
Backward-facing step (BFS) constitutes a canonical conﬁguration to study wallbounded ﬂows subject to massive expansions produced by abrupt changes in geometry. Recirculation ﬂow regions are common in this type of ﬂow, driving the separated ﬂow to its downstream reattachment. Consequently, strong adverse pressure gradients arise through this process, feeding ﬂow instabilities. Therefore, both phenomena are strongly correlated as the recirculation bubble shape deﬁnes how the ﬂow is expanded, and how the pressure rises. In an incompressible ﬂow, this shape depends on the Reynolds value and the expansion ratio. The inﬂuence of these two variables on the bubble length is widely studied, presenting an asymptotic behaviour when both parameters are beyond a certain threshold. This is the usual operating point of many practical applications, such as in aeronautical and environmental engineering. Several numerical and experimental studies have been carried out regarding this topic. The existing simulations considering cases beyond the above-mentioned threshold have only been achieved through turbulence modelling, whereas direct numerical simulations (DNS) have been performed only at low Reynolds numbers. Hence, despite the great importance of achieving this threshold, there is a lack of reliable numerical data to assess the accuracy of turbulence models. In this context, a DNS of an incompressible ﬂow over a BFS is presented in this paper, considering a friction Reynolds number (Reτ) of 395 at the inﬂow and an expansion ratio 2. Finally, the elongation of the Kelvin–Helmholtz instabilities along the shear layer is also studied.
CitationPont, A. [et al.]. Direct numerical simulation of backward-facing step flow at Ret = 395 and expansion ratio 2. "Journal of fluid mechanics", 25 Març 2019, vol. 863, p. 341-363.
URIhttp://hdl.handle.net/2117/128915
DOI10.1017/jfm.2018.1000
ISSN0022-1120
Publisher versionhttps://www.cambridge.org/core/journals/journal-of-fluid-mechanics/article/direct-numerical-simulation-of-backwardfacing-step-flow-at-reunicodestixx1d70f395-and-expansion-ratio-2/F449B7D5C41534C6AC0D2EF2454F7F39
Collections
Share: