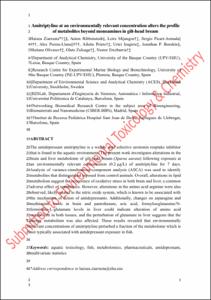 Prieto, Ailette
Izagirre, Urtzi
Document typeArticle
Rights accessOpen Access
Abstract
The antidepressant amitriptyline is a widely used selective serotonin reuptake inhibitor that is found in the aquatic environment. The present work investigates alterations in the brain and liver metabolome of gilt-head bream (Sparus aurata) following exposure at an environmentally relevant concentration (0.2 µg/L) of amitriptyline for 7 days. Analysis of variance-simultaneous component analysis (ASCA) was used to identify metabolites that distinguished exposed from control animals. Overall, alterations in lipid metabolism suggest the occurrence of oxidative stress in both brain and liver, a common adverse effect of xenobiotics. However, alterations in the amino acid arginine were also observed, likely related to the nitric oxide system, which is known to be associated with the mechanism of action of antidepressants. Additionally, changes on asparagine and methionine levels in brain and pantothenate, uric acid, formylisoglutamine/N-formimino-L-glutamate levels in liver could indicate alteration of amino acid metabolism in both tissues, and the perturbation of glutamate in liver suggests that the energy metabolism was also affected. These results revealed that environmentally relevant concentrations of amitriptyline perturbed a fraction of the metabolome which is not typically associated with antidepressant exposure in fish.
CitationZiarrusta, H. [et al.]. Amitriptyline at an environmentally relevant concentration alters the profile of metabolites beyond monoamines in gilt-head bream. "Environmental toxicology and chemistry", 31 Gener 2019, p. 1-29.
URIhttp://hdl.handle.net/2117/128882
DOI10.1002/etc.4381
ISSN0730-7268
Publisher versionhttps://setac.onlinelibrary.wiley.com/doi/abs/10.1002/etc.4381
Collections
Share: