Contributions to topology discovery, self-healing and VNF placement in software-defined and virtualized networks 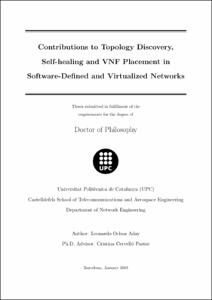 The evolution of information and communication technologies (e.g. cloud computing, the Internet of Things (IoT) and 5G, among others) has enabled a large market of applications and network services for a massive number of users connected to the Internet. Achieving high programmability while decreasing complexity and costs has become an essential aim of networking research due to the ever-increasing pressure generated by these applications and services. However, meeting these goals is an almost impossible task using traditional IP networks. Software-Defined Networking (SDN) is an emerging network architecture that could address the needs of service providers and network operators. This new technology consists in decoupling the control plane from the data plane, enabling the centralization of control functions on a concentrated or distributed platform. It also creates an abstraction between the network infrastructure and network applications, which allows for designing more flexible and programmable networks. Recent trends of increased user demands, the explosion of Internet traffic and diverse service requirements have further driven the interest in the potential capabilities of SDN to enable the introduction of new protocols and traffic management models. This doctoral research is focused on improving high-level policies and control strategies, which are becoming increasingly important given the limitations of current solutions for large-scale SDN environments. Specifically, the three largest challenges addressed in the development of this thesis are related to the processes of topology discovery, fault recovery and Virtual Network Function (VNF) placement in software-defined and virtualized networks. These challenges led to the design of a set of effective techniques, ranging from network protocols to optimal and heuristic algorithms, intended to solve existing problems and contribute to the deployment and adoption of such programmable networks.For the first challenge, this work presents a novel protocol that, unlike existing approaches, enables a distributed layer 2 discovery without the need for previous IP configurations or controller knowledge of the network. By using this mechanism, the SDN controller can discover the network view without incurring scalability issues, while taking advantage of the shortest control paths toward each switch. Moreover, this novel approach achieves noticeable improvement with respect to state-of-the-art techniques. To address the resilience concern of SDN, we propose a self-healing mechanism that recovers the control plane connectivity in SDN-managed environments without overburdening the controller performance. The main idea underlying this proposal is to enable real-time recovery of control paths in the face of failures without the intervention of a controller. Obtained results show that the proposed approach recovers the control topology efficiently in terms of time and message load over a wide range of generated networks. The third contribution made in this thesis combines topology knowledge with bin packing techniques in order to efficiently place the required VNF. An online heuristic algorithm with low-complexity was developed as a suitable solution for dynamic infrastructures. Extensive simulations, using network topologies representative of different scales, validate the good performance of the proposed approaches regarding the number of required instances and the delay among deployed functions. Additionally, the proposed heuristic algorithm improves the execution times by a fifth order of magnitude compared to the optimal formulation of this problem.
CitationOchoa Aday, L. "Contributions to topology discovery, self-healing and VNF placement in software-defined and virtualized networks". Tesi doctoral, UPC, Departament d'Enginyeria Telemàtica, 2019. Available at: <http://hdl.handle.net/2117/128854>
URIhttp://hdl.handle.net/2117/128854

Except where otherwise noted, content on this work is licensed under a Creative Commons license: Attribution-NonCommercial-ShareAlike 4.0 Generic