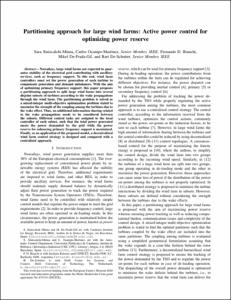 Nowadays, large wind farms are expected to guarantee stability of the electrical grid contributing with ancillary services, such as frequency support. To this end, wind farm controllers must set the power generation of each turbine to compensate generation and demand imbalances. With the aim of optimizing primary frequency support, this paper proposes a partitioning approach to split large wind farms into several disjoint subsets of turbines according to the wake propagations through the wind farm. The partitioning problem is solved as a mixed-integer multi-objective optimization problem stated to maximize the strength of the coupling among the turbines due to the wake effect. Thus, no additional information sharing related to the wake propagations needs to be considered between the subsets. Different control tasks are assigned to the local controller of each subset, such that the total power generated meets the power demanded by the grid while the power reserve for enhancing primary frequency support is maximized. Finally, as an application of the proposed model, a decentralized wind farm control strategy is designed and compared with a centralized approach.

© 2018 IEEE. Personal use of this material is permitted. Permission from IEEE must be obtained for all other uses, in any current or future media, including reprinting/republishing this material for advertising or promotional purposes, creating new collective works, for resale or redistribution to servers or lists, or reuse of any copyrighted component of this work in other works.
CitaciónSiniscalchi, S. [et al.]. Partitioning approach for large wind farms: active power control for optimizing power reserve. A: IEEE Conference on Decision and Control. "2018 IEEE Conference on Decision and Control (CDC)". IEEE Press, 2018, p. 3183-3188.
URIhttp://hdl.handle.net/2117/128818
DOI10.1109/CDC.2018.8619052
Versión del editorhttps://ieeexplore.ieee.org/document/8619052