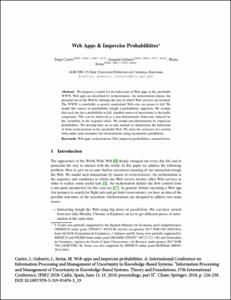 Document typeConference report
PublisherSpringer
Rights accessOpen Access
Abstract
We propose a model for the behaviour of Web apps in the unreliable WWW. Web apps are described by orchestrations. An orchestration mimics the personal use of the Web by defining the way in which Web services are invoked. The WWW is unreliable as poorly maintained Web sites are prone to fail. We model this source of unreliability trough a probabilistic approach. We assume that each site has a probability to fail. Another source of uncertainty is the traffic congestion. This can be observed as a non-deterministic behaviour induced by the variability in the response times. We model non-determinism by imprecise probabilities. We develop here an ex-ante normal to characterize the behaviour of finite orchestrations in the unreliable Web. We show the existence of a normal form under such semantics for orchestrations using asymmetric parallelism.
CitationCastro, J.; Gabarró, J.; Serna, M. Web apps and imprecise probabilities. A: International Conference on Information Processing and Management of Uncertainty in Knowledge-Based Systems. "Information Processing and Management of Uncertainty in Knowledge-Based Systems. Theory and Foundations, 17th International Conference, IPMU 2018: Cádiz, Spain, June 11-15, 2018: proceedings, part II". Cham: Springer, 2018, p. 226-238.
URIhttp://hdl.handle.net/2117/128655
DOI10.1007/978-3-319-91476-3_19
ISBN978-3-319-91476-3
Publisher versionhttps://link.springer.com/chapter/10.1007/978-3-319-91476-3_19
Collections
Share: