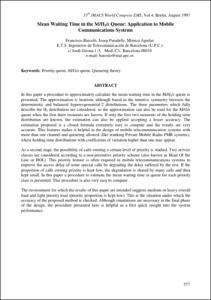 Document typeConference lecture
PublisherWissenschaft & Technik
Rights accessOpen Access
All rights reserved. This work is protected by the corresponding intellectual and industrial property rights. Without prejudice to any existing legal exemptions, reproduction, distribution, public communication or transformation of this work are prohibited without permission of the copyright holder
Abstract
In this paper a procedure to approximately calculate the mean waiting time in the M/H2/s queue is presented. The approximation is heuristic although based in the intuitive symmetry between the deterministic and balanced hyperexponential-2 distributions. The three parameters which fully describe the H2 distribution are considered, so the approximation can also be used for the M/G/s queue when the first three moments are known. If only the first two moments of the holding time distribution are known, the estimation can also be applied accepting a lesser accuracy. The estimation proposed is a closed formula extremely easy to compute and the results are very accurate. This features makes it helpful in the design of mobile telecommunication systems with more than one channel and queueing allowed (like trunking Private Mobile Radio PMR systems), where holding time distributions with coefficients of variation higher than one may appear. As a second stage, the possibility of calls owning a certain level of priority is studied. Two service classes are considered according to a non-preemtive priority scheme (also known as Head Of the Line or HOL). This priority feature is often required in mobile telecommunications systems to improve the access delay of some special calls by degrading the delay suffered by the rest. If the proportion of calls owning priority is kept low, the degradation is shared by many calls and then kept small. In this paper a procedure to estimate the mean waiting time in queue for each priority class is presented. This procedure is also very easy to compute. The environment for which the results of this paper are intended suggests medium or heavy overall load and light priority load (priority proportion is kept low). This is the situation under which the accuracy of the proposed method is checked. Although simulations are necessary in the final phase of the design, the procedure presented here is helpful as a first quick insight into the system performance.
CitationBarcelo, F.; Paradells, J.; Aguilar Igartua, M. Mean waiting time in the M/H2/s queue: application to mobile communications Systems. A: World Congress on Scientific Computation, Modelling and Applied Mathematics. "15th IMACS World Congress on Scientific Computation, Modelling and Applied Mathematics: Berlin, August 1997". Wissenschaft & Technik, 1997, p. 577-582.
URIhttp://hdl.handle.net/2117/128475
ISBN3896855506
Collections
Share: