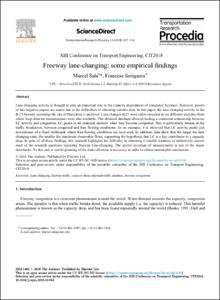 Document typeArticle
PublisherElsevier
Rights accessOpen Access
Abstract
Lane changing activity is thought to play an important role in the capacity degradation of congested freeways. However, proofs of this negative impact are scarce due to the difficulties in obtaining suitable data. In this paper, the lane changing activity in the B-23 freeway accessing the city of Barcelona is analyzed. Lane changes (LC) were video recorded in six different stretches from where loop detector measurements were also available. The obtained database allowed finding a consistent relationship between LC activity and congestion. LC peaks in all analyzed sections when they become congested. This is particularly intense at the traffic breakdown, between congested and free flowing conditions. As an example, it is observed that LC activity peaks just downstream of a fixed bottleneck where free-flowing conditions are recovered. In addition, data show that the larger the lane changing rates, the smaller the maximum observable flows, supporting the hypothesis that LC is a key contributor to a capacity drop. In spite of all these findings, this research highlights the difficulty in obtaining a suitable database to definitively answer most of the research questions regarding freeway lane-changing. The spatial coverage of measurements is one of the major drawbacks. To this end, a careful planning of the data collection is necessary in order to obtain meaningful conclusions.
CitationSala, M.; Soriguera, F. Freeway lane-changing: some empirical findings. "Transportation research procedia", 2018, vol. 33, p. 107-114.
URIhttp://hdl.handle.net/2117/128473
DOI10.1016/j.trpro.2018.10.082
ISSN2352-1457
Publisher versionhttps://www.sciencedirect.com/science/article/pii/S2352146518302370
Collections
Share: