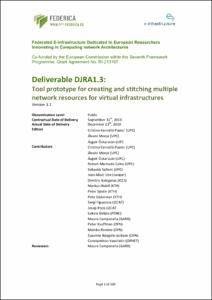 Except where otherwise noted, content on this work is licensed under a Creative Commons license : Attribution-NonCommercial-NoDerivs 3.0 Spain
ProjectFEDERICA - Federated E-infrastructure Dedicated to European Researchers Innovating in Computing network Architectures (EC-FP7-213107)
Abstract
This document reports the final results of JRA1.2 Activity in the development of a tool prototype for creating sets ofvirtual resourcesinFEDERICA.The prototype goal is to simplify and automate part of the work for NOC.The tool may also serve,with different privileges, a FEDERICA user to operate on his/her slice. The tool described here was designed with the objective of providing an interactive application with a graphical interface to operate on resources for the NOC and the end users (researchers). The tool simplify the creation and configuration of resources in a slice and it is a mandatory step to ensure scalability of the NOC effort. It offers an interactive Graphical User Interface that translates the users’ actions to commands in the substrate (networknodesandV-nodes)andslice elements(VirtualMachines).User accounts may be created for the NOC and for researchers, each with specific privileges to enable different sets of capabilities. The NOC account has full access to all the resources in the substrate, while each user’account has full access only to the virtual resources in his/her slice. The tool has been developed using the Java programming language as Open Source code and relies on the open source Globus® Toolkit. Testing has been performed in a laboratory environment and on some FEDERICA substrate equipment (1switch, 2VMwareServers) in their standard configuration. For testing the router, web services and GUI an additional computer was used, using a public IP address.
Description
This document describes the prototype FEDERICA Slice Tool developed for the virtualization of network elements in FEDERICA and for creating and stitching network resources over this virtual infrastructure. An SNMP-based resource discovery prototype is also introduced as a new functionality to be integrated in the tool.The deliverable also presents aviability study for the use of traffic prioritization in the FEDERICA infrastructure and some network performance measurements on a real slice within FEDERICA.
CitationCervelló-Pastor, C.; Monje, Á.; Óskarsson, Á. "Deliverable DJRA1.3: Tool prototype for creating and stitching multiple network resources for virtual infrastructures". 2010.
URIhttp://hdl.handle.net/2117/128395
Collections
Share: