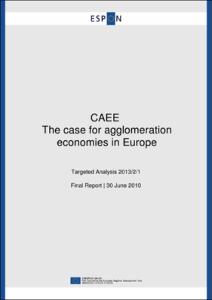 Chica Mejía, Juan Eduardo
Freixas, Jordi
Tomás, Mariona
Document typeResearch report
Rights accessOpen Access
All rights reserved. This work is protected by the corresponding intellectual and industrial property rights. Without prejudice to any existing legal exemptions, reproduction, distribution, public communication or transformation of this work are prohibited without permission of the copyright holder
Abstract
The Barcelona city region case study report is one of the four city studies in the CAEE project. This project forms part of the ESPON 2013 programme and is a "targeted analysis based on user demand". The user demand, in this instance, came from four key policy-making and delivery bodies (the "policy stakeholders") based in Manchester, Barcelona, Dublin and Lyon which, under the leadership of the Commission for the New Economy in Greater Manchester, were interested in exploring the impact of agglomeration economies within and beyond the territories they cover and the extent to which the beneficial impacts of recent patterns of agglomeration have been shaped, and might be managed more effectively, by public policies and programmes [...] The first part of the report examines the administrative structure of the Barcelona city-region and the evolution of metropolitan governance; while the second part focuses upon the economic structure of the city-region in general, prior to a more detailed analysis of a number of key economic sectors in order to reach an understanding of the effects of agglomeration economies over the territory.
CitationBurns, M. [et al.]. "CAEE The case for agglomeration economies in Europe. Targeted Analysis 2013/2/1. Appendix C4: Barcelona Case Study | 30 June 2010". 2010.
Is part ofESPON 2013 Programme
URIhttp://hdl.handle.net/2117/12832
Collections
Share: