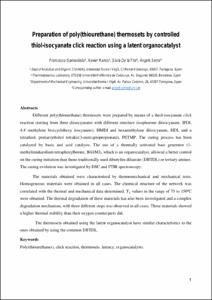 Except where otherwise noted, content on this work is licensed under a Creative Commons license : Attribution-NonCommercial-NoDerivs 3.0 Spain
Abstract
Different poly(thiourethane) thermosets were prepared by means of a thiol-isocyanate click reaction starting from three diisocyanates with different structure (isophorone diisocyanate, IPDI, 4,4'-methylene bis(cyclohexy isocyanate), HMDI and hexamethylene diisocyanate, HDI, and a tetrathiol, pentaerythritol tetrakis(3-mercap- topropionate), PETMP. The curing process has been catalyzed by basic and acid catalysts. The use of a thermally activated base generator (1-methylimidazolium tetraphenylborate, BG1MI), which is an organocatalyst, allowed a better control on the curing initiation than those traditionally used dibutyltin dilaurate (DBTDL) or tertiary amines. The curing evolution was investigated by DSC and FTIR spectroscopy. The materials obtained were characterized by thermomechanical and mechanical tests. Homogeneous ma- terials were obtained in all cases. The chemical structure of the network was correlated with the thermal and mechanical data determined. T g values in the range of 75 to 150 °C were obtained. The thermal degradation of these materials has also been investigated and a complex degradation mechanism, with three different steps was observed in all cases. These materials showed a higher thermal stability than their oxygen counterparts did. The thermosets obtained using the latent organocatalyst have similar characteristics to the ones obtained by using the common DBTDL
CitationGamardella, F. [et al.]. Preparation of poly(thiourethane) thermosets by controlled thiol-isocyanate click reaction using a latent organocatalyst. "Reactive and functional polymers", 1 Gener 2019, vol. 134, núm. January, p. 174-182.
URIhttp://hdl.handle.net/2117/128308
DOI10.1016/j.reactfunctpolym.2018.11.019
ISSN1381-5148
Publisher versionhttps://www.sciencedirect.com/science/article/pii/S1381514818308812
Collections
Share: