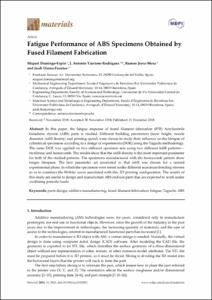 Except where otherwise noted, content on this work is licensed under a Creative Commons license : Attribution-NonCommercial-NoDerivs 3.0 Spain
Abstract
In this paper, the fatigue response of fused filament fabrication (FFF) Acrylonitrile butadiene styrene (ABS) parts is studied. Different building parameters (layer height, nozzle diameter, infill density, and printing speed) were chosen to study their influence on the lifespan of cylindrical specimens according to a design of experiments (DOE) using the Taguchi methodology. The same DOE was applied on two different specimen sets using two different infill patterns—rectilinear and honeycomb. The results show that the infill density is the most important parameter for both of the studied patterns. The specimens manufactured with the honeycomb pattern show longer lifespans. The best parameter set associated to that infill was chosen for a second experimental phase, in which the specimens were tested under different maximum bending stresses so as to construct the Wöhler curve associated with this 3D printing configuration. The results of this study are useful to design and manufacture ABS end-use parts that are expected to work under oscillating periodic loads.
CitationDomingo, M. [et al.]. Fatigue performance of ABS specimens obtained by fused filament fabrication. "Materials", 11 Desembre 2018, vol. 11, núm. 12, p. 2521-2536.
URIhttp://hdl.handle.net/2117/128103
DOI10.3390/ma11122521
ISSN1996-1944
Publisher versionhttps://www.mdpi.com/1996-1944/11/12/2521
Collections
Share: