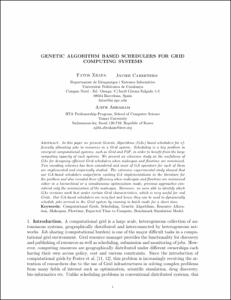 Carretero Casado, Javier Sebastián
Abraham, Ajith
Document typeArticle
Rights accessOpen Access
Abstract
In this paper we present Genetic Algorithms (GAs) based schedulers for efficiently allocating jobs to resources in a Grid system. Scheduling is a key problem in emergent computational systems, such as Grid and P2P, in order to benefit from the large computing capacity of such systems. We present an extensive study on the usefulness of GAs for designing efficient Grid schedulers when makespan and flowtime are minimized. Two encoding schemes have been considered and most of GA operators for each of them are implemented and empirically studied. The extensive experimental study showed that our GA-based schedulers outperform existing GA implementations in the literature for the problem and also revealed their efficiency when makespan and flowtime are minimized either in a hierarchical or a simultaneous optimization mode; previous approaches considered only the minimization of the makespan. Moreover, we were able to identify which GAs versions work best under certain Grid characteristics, which is very useful for real Grids. Our GA-based schedulers are very fast and hence they can be used to dynamically schedule jobs arriving in the Grid system by running in batch mode for a short time.
CitationXhafa, F.; Carretero, J.S.; Abraham, A. Genetic algorithm based schedulers for grid computing systems. "International journal of innovative computing information and control", Octubre 2007, vol. 3, núm. 5, p. 1053-1071.
URIhttp://hdl.handle.net/2117/128072
ISSN1349-4198
Publisher versionhttp://www.ijicic.org/contents.htm
Collections
Share: