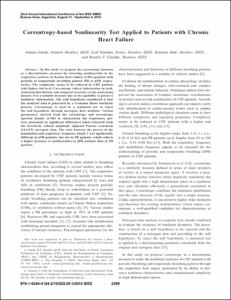 In this study we propose the correntropy function as a discriminative measure for detecting nonlinearities in the respiratory pattern of chronic heart failure (CHF) patients with periodic or nonperiodic breathing pattern (PB or nPB, respectively). The complexity seems to be reduced in CHF patients with higher risk level. Correntropy reflects information on both, statistical distribution and temporal structure of the underlying dataset. It is a suitable measure due to its capability to preserve nonlinear information. The null hypothesis considered is that the analyzed data is generated by a Gaussian linear stochastic process. Correntropy is used in a statistical test to reject the null hypothesis through surrogate data methods. Various parameters, derived from the correntropy and correntropy spectral density (CSD) to characterize the respiratory pattern, presented no significant differences when extracted from the iteratively refined amplitude adjusted Fourier transform (IAAFT) surrogate data. The ratio between the powers in the modulation and respiratory frequency bands R was significantly different in nPB patients, but not in PB patients, which reflects a higher presence of nonlinearities in nPB patients than in PB patients.
CitationGarde, A. [et al.]. Correntropy-based nonlinearity test applied to patients with chronic heart failure. A: Annual International Conference of the IEEE Engineering in Medicine and Biology Society (EMBS). "32th Annual International Conference of the IEEE Engineering in Medicine and Biology Society". Buenos Aires: 2010, p. 2399-2402.
URIhttp://hdl.handle.net/2117/12807
DOI10.1109/IEMBS.2010.5627167