Control design and implementation of a twin robot 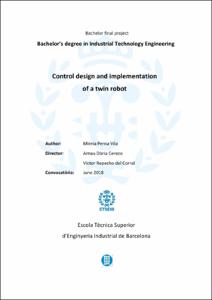 The purpose of this project is the creation of a controller for an autonomous robot. To achieve this, the accelerometer of the STM32F4 - Dsicovery board will be used which will be coupled to the robot. This project it is an extension of pre vious projects referenced below which worked with the same robot implementing the following application: - Design and i mplementation of a line tracking system for the robot. - Design and implementation of a WiFi communication system for the robot. The extensio n will be the design and implementation of a PD controller for the line tracking robot. The innovation will be the use of the acceleration data obtained directly from the accelerometer MEMS of the discovery board in order to design the derivative controlle r. First step will be the theoretical design of the controller using the Routh - Hurwitz theorem and the following simulations using Matlab an d Simulink, to prove the response of the robot that will be expected in the experimental tests. Once the controller is designed, the discovery board will be programed in order to implement the controller. To condition the data acquired for the accelerometer it is going to be designed a first order low - pass filter and an axis rotation system in order to use this data for the controller. Finally, using a communication system and the line tracking system it is going to be proved the real response of the robot and the controller by experimental tests in a closed circuit.
SubjectsRobots, Robots
URIhttp://hdl.handle.net/2117/128046