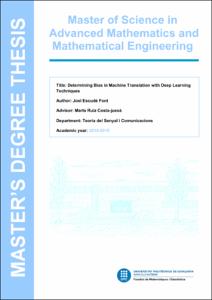 Document typeMaster thesis
Rights accessOpen Access
Abstract
The presence of biases in artificial intelligence is arising as a social challenge. In the particular application of machine translation, when you translate a sentence to a non-gender neutral language like Spanish, from a less gender neutral language like English, the model makes a guess on the gender of the subject. These models are trained on available large text corpora which contains biases and stereotypes. As a consequence, models inherit these social constructs. An example of this is the fact that "friend" in the English sentence "She works in a hospital, my friend is a nurse" would be correctly translated to "amiga" (feminine of friend) in Spanish, while "She works in a hospital, my friend is a doctor" would be incorrectly translated to "amigo" (masculine of friend) in Spanish. An experimental setting is defined, we use a set of debiased pre-trained word embeddings, vector representation of words, in the Transformer, a neural network architecture for machine translation, to study how debiasing affects the translation models. We show that the performance of the models is not compromised for debiased embeddings and the proposed system learns to neutralize previously existing biases.
SubjectsArtificial intelligence, Intel·ligència artificial
URIhttp://hdl.handle.net/2117/128025
Collections
Share: