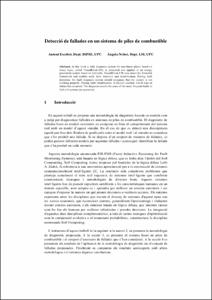 In this work a fault diagnosis system for non-linear plants based on fuzzy logic, called VisualBlock-FIR, is presented and applied to an energy generation system based on fuel cells. VisualBlock-FIR runs under the Simulink framework and enables early fault detection and identification. During fault detection, the fault diagnosis system should recognize that the system is not working properly. During fault identification, it should conclude which type of failure has occurred. The diagnosis results for some of the most frequent faults in fuel cell systems are presented.
CitationEscobet, A.; Nebot, A. "Detecció de fallades en un sistema de piles de combustible". 2010.
URIhttp://hdl.handle.net/2117/12791
URL other repositoryhttp://www.lsi.upc.edu/dept/techreps/llistat_detallat.php?id=1075