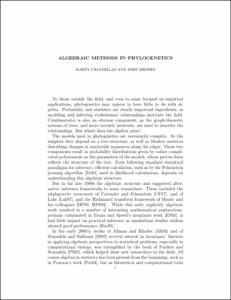 Rhodes, John
Document typeArticle
Rights accessOpen Access
Abstract
To those outside the field, and even to some focused on empirical applications, phylogenetics may appear to have little to do with algebra. Probability and statistics are clearly important ingredients, as modeling and inferring evolutionary relationships motivate the field. Combinatorics is also an obvious component, as the graph-theoretic notions of trees, and more recently networks, are used to describe the relationships. But where does the algebra arise? The models used in phylogenetics are necessarily complex. At the simplest, they depend on a tree structure, as well as Markov matrices describing changes in nucleotide sequences along the edges. These two components result in probability distributions given by rather complicated polynomials on the parameters of the models, whose precise form reflects the structure of the tree.
CitationCasanellas, M.; Rhodes, J. Algebraic methods in phylogenetics. "Bulletin of mathematical biology", 19 Desembre 2018, vol. 81, núm. 2, p. 313-315.
URIhttp://hdl.handle.net/2117/127895
DOI10.1007/s11538-018-00551-3
ISSN0092-8240
Publisher versionhttps://link.springer.com/article/10.1007%2Fs11538-018-00551-3
Collections
Share: