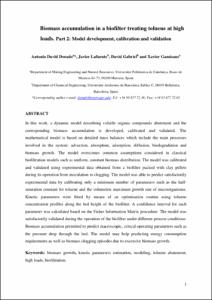 Except where otherwise noted, content on this work is licensed under a Creative Commons license : Attribution-NonCommercial-NoDerivs 3.0 Spain
Project
Abstract
In this work, a dynamic model describing volatile organic compounds abatement and the corresponding biomass accumulation is developed, calibrated and validated. The mathematical model is based on detailed mass balances which include the main processes involved in the system: advection, absorption, adsorption, diffusion, biodegradation and biomass growth. The model overcomes common assumptions considered in classical biofiltration models such as uniform, constant biomass distribution. The model was calibrated and validated using experimental data obtained from a biofilter packed with clay pellets during its operation from inoculation to clogging. The model was able to predict satisfactorily experimental data by calibrating only a minimum number of parameters such as the half-saturation constant for toluene and the volumetric maximum growth rate of microorganisms. Kinetic parameters were fitted by means of an optimization routine using toluene concentration profiles along the bed height of the biofilter. A confidence interval for each parameter was calculated based on the Fisher Information Matrix procedure. The model was satisfactorily validated during the operation of the biofilter under different process conditions. Biomass accumulation permitted to predict macroscopic, critical operating parameters such as the pressure drop through the bed. The model may help predicting energy consumption requirements as well as biomass clogging episodes due to excessive biomass growth.
CitationDorado, A.D. [et al.]. Biomass accumulation in a biofilter treating toluene at high loads – Part 2: Model development, calibration and validation. "Chemical engineering journal", 15 Octubre 2012, vol. 209, p. 670-676.
URIhttp://hdl.handle.net/2117/127886
DOI10.1016/j.cej.2012.08.019
ISSN0300-9467
Publisher versionhttps://www.sciencedirect.com/science/article/pii/S1385894712010649
Collections
Share: