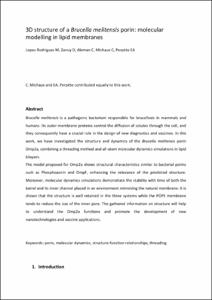 Michaux, Catherine Anne Gisèle
Perpète, Eric A.
Document typeArticle
Rights accessOpen Access
Abstract
Brucella melitensis is a pathogenic bacterium responsible for brucellosis in mammals and humans. Its outer membrane proteins (Omp) control the diffusion of solutes through the membrane, and they consequently have a crucial role in the design of diagnostics and vaccines. Moreover, such proteins have recently revealed their potential for protein-based biomaterials. In the present contribution, the structure of the B. melitensis porin Omp2a is built using the RaptorX threading method. This is a 16-stranded ß-barrel with an a-helix on the third loop folding inside the barrel and forming the constriction zone of the channel, a typical feature of general porins such as PhoE and OmpF. The preferential diffusion of cations over anions experimentally observed in anterior studies is evidenced by the presence of distinct clusters of charges in the extracellular loops and in the inner pore. Docking studies support the previously reported hypothesis of Omp2a ability to aid maltotetraose diffusion. The monomer model is then assembled into a homotrimer, stabilized by the L2 loop involved in most of the interface interactions. The stability of the trimer is evaluated in three bilayers: pure 1-palmitoyl-2-oleoyl-sn-glycero-3-phosphocholine (POPC), pure 1-palmitoyl-2-oleoyl-sn-glycero-3-phosphoethanolamine (POPE) and a mixture of 1:1 of POPC/POPE. All-atom molecular dynamics simulations demonstrate the ß-barrel-structural stability over time even though a breathing-like motion is observed. Compared to the pure bilayers, the POPC/POPE better preserves the integrity of the protein and its channel. Overall, this work demonstrates the relevancy of the Omp2a model and will help to design new therapeutic agents and bioinspired nanomaterials
CitationLopes, M. [et al.]. 3D structure of a Brucella melitensis porin: molecular modelling in lipid membranes. "Journal of biomolecular structure and dynamics", 2019, vol, 37, núm. 15, p.3923-3935
URIhttp://hdl.handle.net/2117/127854
DOI10.1080/07391102.2018.1529627
ISSN0739-1102
Publisher versionhttps://www.tandfonline.com/doi/abs/10.1080/07391102.2018.1529627
Collections
Share: