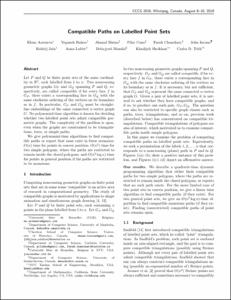 Chanchary, Farah
Iacono, John
Jain, Kshitij
Lubiw, Anna
Mondal, Debajyoti
Sheikhan, Khadijeh
D. Thót, Csaba
Document typeConference report
Rights accessOpen Access
Abstract
Let P and Q be finite point sets of the same cardinality in R 2 , each labelled from 1 to n. Two noncrossing geometric graphs GP and GQ spanning P and Q, respectively, are called compatible if for every face f in GP , there exists a corresponding face in GQ with the same clockwise ordering of the vertices on its boundary as in f. In particular, GP and GQ must be straightline embeddings of the same connected n-vertex graph G. No polynomial-time algorithm is known for deciding whether two labelled point sets admit compatible geometric graphs. The complexity of the problem is open, even when the graphs are constrained to be triangulations, trees, or simple paths. We give polynomial-time algorithms to find compatible paths or report that none exist in three scenarios: O(n) time for points in convex position; O(n 2 ) time for two simple polygons, where the paths are restricted to remain inside the closed polygons; and O(n 2 log n) time for points in general position if the paths are restricted to be monotone
CitationArseneva, E. [et al.]. Compatible Paths on Labelled Point Sets. A: Canadian Conference on Computational Geometry. "CCCG 2018: 30th Canadian Conference on Computational Geometry: Manitoba, Canada: August 8-10, 2018: proceedings book". 2019, p. 54-60.
URIhttp://hdl.handle.net/2117/127832
Collections
Share: