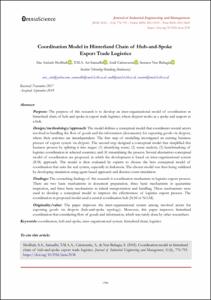 Show full item record
Sholihah, Sita Aniisah
Samadhi, T.M.A. Ari
Cakravastia, Andi
Bahagia, Senator Nur
Document typeArticle
PublisherOmniaScience
Rights accessOpen Access
Abstract
Purpose: The purpose of this research is to develop an inter-organizational model of coordination in hinterland chain of hub-and-spoke in global logistics, where dryport works as a spoke and seaport as a hub. Design/methodology/approach: The model built will define a conceptual model in order to coordinate several actors involved in handling the flow of goods and the flow of information (documents) in exporting goods via dryport, where their activities are interdependence. Therefore the first step was to investigate an existing business process of export system via dryport. Value Stream Mapping (VSM) is used to identify bottleneck in existing system and simplify the process. The third step was benchmarking coordination in selected country that have similarity of hinterland characteristics with Indonesia (archipelago country), and exporting agricultural or animal products. After that several alternatives conceptual model of coordination will be proposed, of which the development based on inter-organizational system (IOS) approach. The model is then evaluated by experts to choose the best conceptual model of coordination that suits the real system, especially in Indonesia. The choosen model then being validated by developing simulation using agent-based approach and discrete-event simulation. Findings: The findings of this research is coordination mechanism in export process. There are two basic mechanisms in document preparation, three basic mechanisms in quarantine inspection, and three basic mechanisms in inland transportation and handling. The proposed model using a single connection and single submission to handling coordination among actors. Originality/value: The paper provide coordination of inter-organizational system among involved actors in handling physical flow of goods and flow of information (documents) in arranging exporting goods via dryport (hub-and-spoke typology). Moreover, scope of research is hinterland (outside seaport) with coordination that considering flow of information in hub-and-spoke concept was rarely done by other researchers.
CitationSholihah, S. A. [et al.]. Coordination model in Hinterland chain of hub-and-spoke export trade logistics. "Journal of Industrial Engineering and Management", Desembre 2018, vol. 11, núm. 4, p. 776-793.
URIhttp://hdl.handle.net/2117/127534
DOI10.3926/jiem.2538
DLB-28744-2008
ISSN2013-0953
Collections
Share:

Except where otherwise noted, content on this work is licensed under a Creative Commons license : Attribution-NonCommercial 4.0 Generic