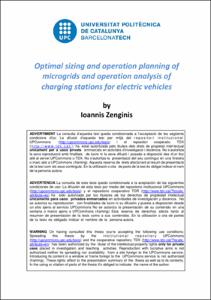 Show full item record
Zenginis, Ioannis
Tutor / director / evaluatorVerikoukis, Christos; Vardakas, John
Chair / Department / Institute
Universitat Politècnica de Catalunya. Departament de Teoria del Senyal i Comunicacions
Document typeDoctoral thesis
PublisherUniversitat Politècnica de Catalunya
Rights accessOpen Access
Abstract
Energy and transportation sectors are going through major changes as a result of technological advances, depletion of fossil fuels and climate change. With regard to the energy sector, the future smart grid is expected to be an interconnected network of small-scale and self-contained microgrids, in addition to a large-scale electric power backbone. By utilizing microsources, such as renewable energy sources, energy storage systems and vehicle-to-grid systems, microgrids target to satisfy the customers’ energy demands in a safe, reliable, economic and environmentally friendly way. With regard to the changes in the transportation sector, internal combustion engine vehicles are expected to be gradually replaced by electric vehicles, which are considered to be a promising solution for mitigating the impact of transportation sector on the environment. The presented thesis deals with two main topics; the first one refers to the optimal sizing and operation planning of microgrids comprising various urban building types, while the second one is related to the operation of fast charging stations for electric vehicles that are located in densely populated areas. The first objective of the thesis is to examine the effect of energy exchanges among interconnected buildings with diverse load profiles on the sizes of power equipment to be installed at the buildings. To this end, a mixed integer linear programming optimization framework is presented that determines the optimal capacities of photovoltaic panels, energy storage systems, and inverters, as well as the optimum management of the generated power. As a first step, the benefits of cooperation among buildings that are already interconnected through an existing point of common coupling is examined. The cooperation benefits are derived by comparing the buildings' costs when they participate in the microgrid with their costs when they operate as separate entities. As a second step, a different microgrid topology is proposed where energy exchanges take place through a common DC bus. In this way, neighboring buildings that are not already physically connected can be members of the same microgrid. Moreover, the optimization results for the new topology are obtained by using the Nash bargaining method, through which the benefits of cooperation are equally distributed among the participating members. Finally, the possible integration of new buildings in the existing microgrid at a later time point is also examined. The second objective of the thesis is to provide an accurate operation analysis of fast charging stations for electric vehicles. To this end, a novel queuing theory-based model is presented that classifies the various electric vehicles by their battery size. As a first step, it is analyzed a charging station that contains DC outlets, and the electric vehicles recharge their batteries up to the maximum possible level. The proposed model takes into account the arrival rates and state of charge of the electric vehicles' batteries when arriving at the station, in order to compute the maximum number of customers that can be served, subject to an upper bound for the waiting time in the queue. In addition, a charging strategy is proposed, which allows the charging station to serve more customers without any increase in the queue waiting time. As a second step, it is considered that the charging station can serve both DC and AC electric vehicle classes, while a more flexible way is adopted for denoting the customers' recharging patterns. Based on these additional novelties, the overall profit margin of the charging station operator, and the queue waiting times of the DC and AC classes are calculated under two different pricing policies.
CitationZenginis, I. Optimal sizing and operation planning of microgrids and operation analysis of charging stations for electric vehicles. Tesi doctoral, UPC, Departament de Teoria del Senyal i Comunicacions, 2018. Available at: <http://hdl.handle.net/2117/127496>
URIhttp://hdl.handle.net/2117/127496
Collections
Share: