A white dwarf catalogue from Gaia-DR2 and the Virtual Observatory 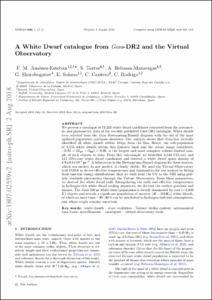 Skorobogatov, G.
Cantero, C.
Document typeArticle
PublisherOxford University Press
Rights accessOpen Access
Abstract
We present a catalogue of 73¿221 white dwarf candidates extracted from the astrometric and photometric data of the recently published Gaia-DR2 catalogue. White dwarfs were selected from the Gaia Hertzsprung–Russell diagram with the aid of the most updated population synthesis simulator. Our analysis shows that Gaia has virtually identified all white dwarfs within 100¿pc from the Sun. Hence, our sub-population of 8555 white dwarfs within this distance limit and the colour range considered, -0.52<(GBP-GRP)<0.80¿, is the largest and most complete volume-limited sample of such objects to date. From this sub-sample, we identified 8343 CO-core and 212 ONe-core white dwarf candidates and derived a white dwarf space density of 4.9±0.4×10-3pc-3¿. A bifurcation in the Hertzsprung–Russell diagram for these sources, which our models do not predict, is clearly visible. We used the Virtual Observatory SED Analyzer tool to derive effective temperatures and luminosities for our sources by fitting their spectral energy distributions, that we built from the ultraviolet to the near-infrared using publicly available photometry through the Virtual Observatory. From these parameters, we derived the white dwarf radii. Interpolating the radii and effective temperatures in hydrogen-rich white dwarf cooling sequences, we derived the surface gravities and masses. The Gaia 100¿pc white dwarf population is clearly dominated by cool (~8000¿K) objects and reveals a significant population of massive (¿M~0.8M¿¿) white dwarfs, of which no more than ~30--40 per cent can be attributed to hydrogen-deficient atmospheres, and whose origin remains uncertain.
CitationJiménez, F., Torres, S., Rebassa, A., Skorobogatov, G., Cantero, C. A white dwarf catalogue from Gaia-DR2 and the Virtual Observatory. "Montly Notices of the Royal Astronomical Society", 1 Gener 2018, vol. 480, núm. 4, p. 4505-4518.
URIhttp://hdl.handle.net/2117/127445
DOI10.1093/MNRAS/STY2120
ISSN1365-2966
Collections
Share: