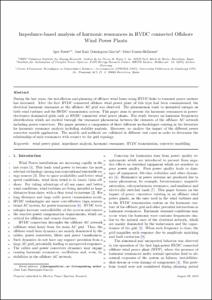 Document typeArticle
Rights accessOpen Access
Abstract
During the last years, the installation and planning of offshore wind farms using HVDC-links to transmit power onshore has increased. After the first HVDC connected offshore wind power plant of this type had been commissioned, the electrical harmonic resonance at the offshore AC grid was observed. The phenomenon leads to unwanted outages on both wind turbines and the HVDC transmission system. This paper aims to present the harmonic resonances in power-electronics dominated grids such as HVDC connected wind power plants. The study focuses on harmonic frequencies identification which are excited through the resonance phenomena between the elements of the offshore AC network including power converters. The paper presents a comparison of three different methodologies existing in the literature for harmonic resonance analysis including stability analysis. Moreover, we analyse the impact of the different power converter models application. The models and methods are validated in different test cases in order to determine the relationship of such resonances with respect to the grid topology.
CitationSowa, I., Domínguez , J., Gomis-Bellmunt, O. Impedance-based analysis of harmonic resonances in HVDC connected offshore wind power plants. "Electric power systems research", 1 Gener 2019, vol. 166, núm. January, p. 61-72.
URIhttp://hdl.handle.net/2117/127416
DOI10.1016/j.epsr.2018.10.003
ISSN0378-7796
Publisher versionhttps://www.sciencedirect.com/science/article/pii/S0378779618303201?via%3Dihub
Collections
Share: