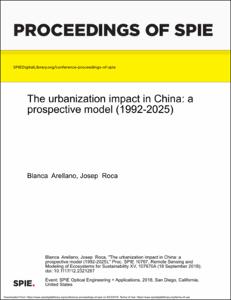 Document typeConference report
PublisherInternational Society for Photo-Optical Instrumentation Engineers (SPIE)
Rights accessOpen Access
Abstract
The gradual spread of urbanization, the phenomenon known under the term urban sprawl, has become one of the paradigms that have characterized the urban development since the second half of the twentieth century and early twenty-first century. The arrival of electrification to nearly every corner of the planet is certainly the first and more meaningful indicator of artificialization of land. In this sense, the paper proposes a new methodology designed to identify the highly impacted landscapes in China based on the analysis of the satellite image of nighttime lights. The night-lights have been used widespread in scientific contributions, from building human development indices, identifying megalopolis or analyzing the phenomenon of urbanization and sprawl, but generally they have not been used to forecast the urbanization in the near future. This paper proposes to study the urbanization impact in China between 1992 and 2013, and models a hypothesis of future scenarios of urbanization (2013-2025). For this purpose, the paper uses DMSP-OLS Nighttime Lights (1992 – 2013). After obtaining a homogeneous series for the whole period 1992- 2013, we proceed to model the spatial dynamics of past urbanization process using the
CitationArellano, Blanca, Roca, J. The urbanization impact in China: A prospective model (1992-2025). A: SPIE Optics + Photonics. "Proceedings of SPIE 2018". Washington: International Society for Photo-Optical Instrumentation Engineers (SPIE), 2018, p. 1-17.
URIhttp://hdl.handle.net/2117/127387
DOI10.1117/12.2321267
ISBN0277-786X
Publisher versionhttps://www.spiedigitallibrary.org/conference-proceedings-of-spie/10767/0000/Green-areas-and-urban-heat-island--combining-remote-sensed/10.1117/12.2320999.short?SSO=1
Collections
Share: