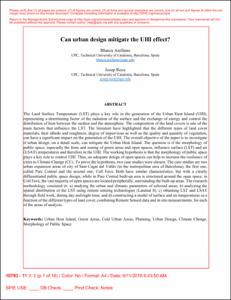 The Land Surface Temperature (LST) plays a key role in the generation of the Urban Heat Island (UHI), representing a determining factor of the radiation of the surface and the exchange of energy and control the distribution of heat between the surface and the atmosphere. The composition of the land covers is one of the main factors that influence the LST. The literature have highlighted that the different types of land cover materials, their albedo and roughness, degree of impervious as well as the quality and quantity of vegetation, can have a significant impact on the generation of the UHI. The overall objective of the paper is to investigate if urban design, on a detail scale, can mitigate the Urban Heat Island. The question is if the morphology of public space, especially the form and zoning of green areas and open spaces, influence surface (LST) and air (LSAT) temperatures and therefore in the UHI. The working hypothesis is that the morphology of public space plays a key role to control UHI. Thus, an adequate design of open spaces can help to increase the resilience of cities to Climate Change (CC). To prove the hypothesis, two case studies were chosen. The case studies are two urban expansion areas of city of Sant Cugat del Vallès (in the metropolitan area of Barcelona), the first one, called Parc Central and the second one, Coll Favà. Both have similar characteristics, but with a clearly differentiated public space design; while in Parc Central built-up area is structured around the open space, in Coll Favà, the vast majority of open spaces are located peripherally, surrounding the built-up areas. The research methodology consisted in: a) studying the urban and climatic parameters of selected areas; b) analyzing the spatial distribution of the LST using remote sensing technologies (Landsat 8); c) obtaining LST and LSAT through field work, during day and night time; and d) constructing a model of surface and air temperatures as a function of the different types of land cover, combining Remote Sensed data and in situ measurements, for each of the areas of analysis.
CitationArellano, Blanca, Roca, J. Can urban design mitigate the UHI effect?. A: International Symposium on Remote Sensing. "SPIE Remote Sensing 2018". Washington: International Society for Photo-Optical Instrumentation Engineers (SPIE), 2018, p. 1-16.
URIhttp://hdl.handle.net/2117/127386
Publisher versionhttps://www.spiedigitallibrary.org/conference-proceedings-of-spie/browse/SPIE-Remote-Sensing/2018